Seite 2 von 3<123>
How to Overcome the Hurdles on the Path to the "United States of Europe":

How to Overcome the Hurdles on the Path to the "United States of Europe": A New Book by seven German Professors has just appeared

In a new book on overcoming the hurdles on the path towards the "United States of Europe" seven German professors intend to empower the readers to understand the complexities of forming a federal state in Europe. The book is also seen as an encouragement of all the initiatives to form a federal state in Europa what is also the intention of the Spinelli-Group project for a European Federation based at the European Parliament (http://www.spinelligroup.eu/). The authors of the book argue that the fiscal and financial crises in Europe request a new approach in handling the issues and in solving the major problems which appeared at the center stage after the global financial crisis of 2008/2009. 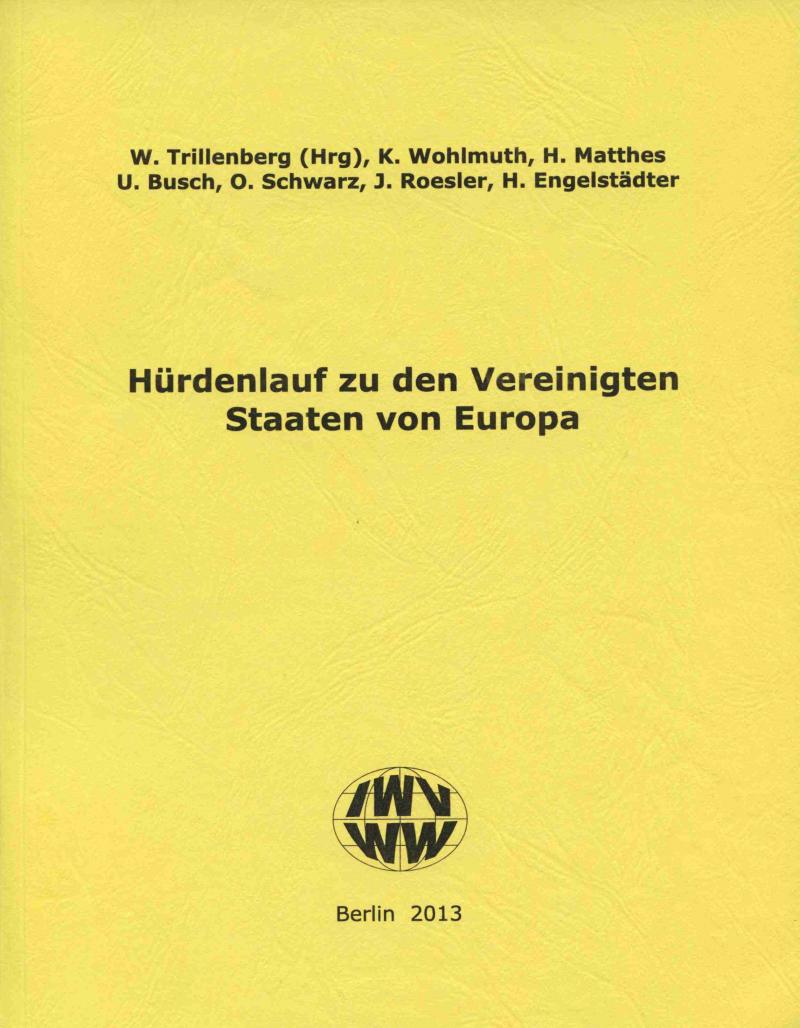 Towards "United States of Europe": Overcoming the Hurdles

Economics Professor Karl Wohlmuth considers in his chapter the links between stabilizing the Euro system and forming a Political Union. According to his view, the discussion about the project "European Political Union" and the project "United States of Europe" is intensified in recent times, in political as well as in academic circles. This has various reasons: First, it is considered as necessary to deepen the European integration process because of the fact that various important policy areas are not yet covered. The sovereign debt crisis in Europe shows that fiscal policy is such an area where deeper integration is needed and that even common fiscal rules may be inferior to a full-scale fiscal union. Second, steps towards political unification are considered as vital in order to save the Euro in the long run, and so to prevent a collapse of this cornerstone of Europe's integration process, as it turned out that crisis management so far was not successful in Europe, mainly because of a serious lack of political cohesiveness. Third, the formation of the G20 group as a global decision-making body as well as of the BRICS (Brazil, Russia, India, China and South Africa) group as an important global actor show that Europe has to unify politically in order to impact on the decision-making processes on world economy and world politics affairs.

Experiences over more than forty (40!) months of hectic crisis management in Europe show that five issues are important and have to be addressed: first, the failure of the European Constitution process has quite negative effects on European integration and on the Euro crisis management as the Lisbon Treaty is not a full substitute; second, the economic policies in Europe are not coherent as there were no further steps towards a European Political Union and especially towards EU fiscal coordination and EU fiscal federalism; third, the European Central Bank (ECB) is overburdened with tasks because the balance between various economic policy actors in the EU and in the Eurozone is not granted; fourth, the lack of progress in further and deeper European integration is paralyzing decision-making processes in Europa and is as well leading to uneven and unsustainable growth patterns; and fifth, the neglect of all lessons gained over decades from the "political economy of reform politics" during crisis management in Europa has impeded seriously the overall outcome of crisis management.

It is shown in the chapter by Professor Karl Wohlmuth that these five properties of the unfinished European integration process have negative repercussions on Europe, and especially so on the Eurozone and the Euro. Therefore, concerted steps towards political unification and towards a realization of the project "United States of Europe" are inevitable in order to save the Euro, the Eurozone and the European integration process.

Trends in Foreign Direct Investment in Uzbekistan: Patterns and Perspectives

A new study on the Perspectives of Foreign Direct Investment in Uzbekistan by Dr. Ubaydulla Nadirkhanov, Postdoc Researcher, Institute of Economy, Academy of Sciences of the Republic Uzbekistan, was published in the journal "Berichte, Januar 2013"/"Reports", January 2013 of the Research Institute  of the IWVWW e. V. in Berlin, the journal of the partner institute of IWIM. The article in "Berichte, Januar 2013" is based on a research work of Dr. U. Nadirkhanov when he was a guest researcher at IWIM, Bremen in 2012. The research work was presented at the Research Seminar on Trends in Transition and Developing Countries with the title Resource-rich Developing and Transition Countries: The Cases of Nigeria and Uzbekistan, and it was organized by the two Economics Professors Axel Sell and Karl Wohlmuth from the Faculty of Economics and Business Studies (link to the guest researchers' programs: http://www.iwim.uni-bremen.de/files/dateien/1674_einladung_forschungsstipendiaten_8_2012.pdf). The Seminar took place in August 2012, at IWIM, University of Bremen (see the details of the academic event: http://www.uni-bremen.de/kalender/event/caldate/2012/08/15/view/event/view-list%7Cpage_id-1/tx_cal_phpicalendar/1310.html?cHash=69534d1bc271992adaaca5ca23350050).

This was the title of a presentation by Dr. Ubaydulla S. Nadirkhanov, a Postdoc Researcher from the Institute of Economy, Academy of Sciences of the Republic Uzbekistan, Tashkent (see the paper by the author). Obviously Uzbekistan is following a foreign investment strategy so as to modernize and diversify the economy. New trends and policy implications were presented and discussed.

Dr. Nadirkhanov is a senior guest researcher at the University of Bremen (Faculty of Economics, Research Group Professor Sell), and the research scholarship was financed by the DAAD. 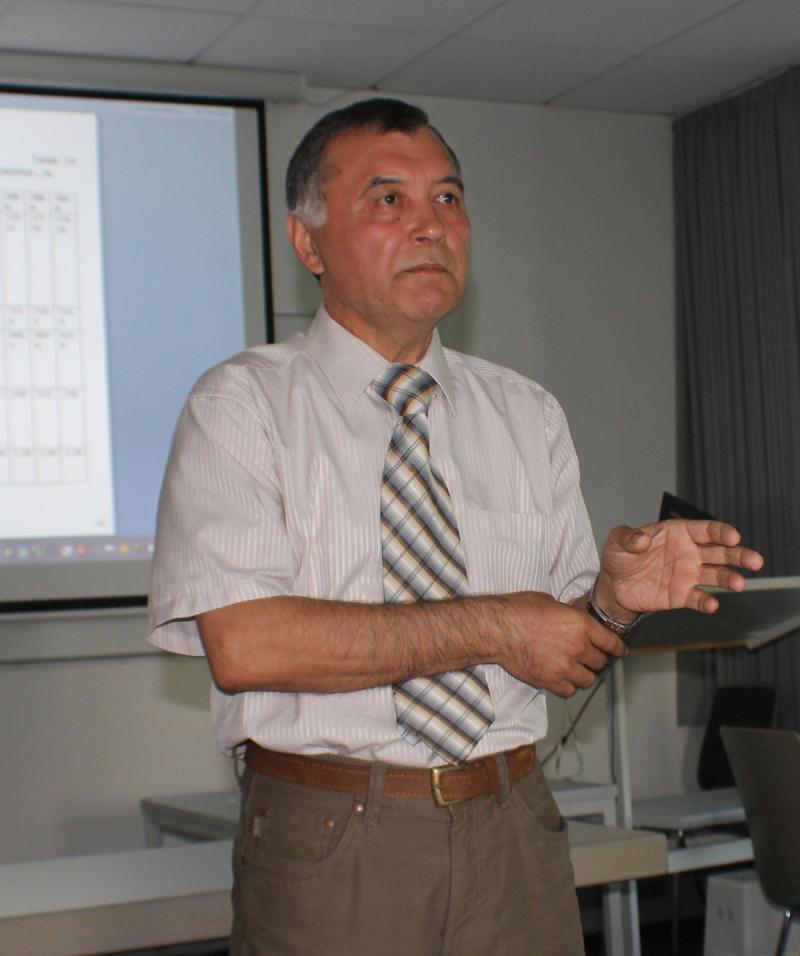 Dr. Nadirkhanov during his presentation 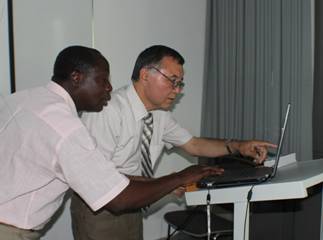 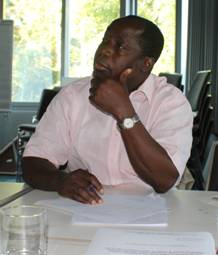 Professor Alabi is listening to the statements and presentations 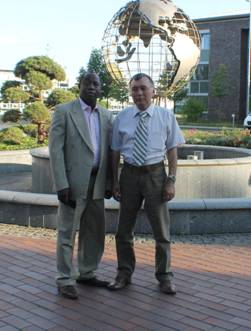 Professor Alabi and Dr. Nadirkhanov after their presentations 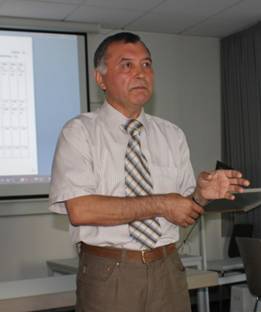 Dr. Nadirkhanov praises the activities of IWIM which was founded 25 years ago in August 1987 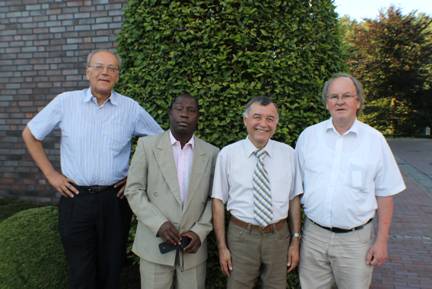 
The presentations and/or the papers will be revised by the authors and will then be made public in due time.

Workshop "Resource-rich Developing and Transition Countries: The Cases of Nigeria and Uzbekistan" on August 15, 2012:

Two Senior Research Scholars will report on their researches:

Lecture and Discussion: The Aid-Growth Link in Sub-Saharan Africa. The Case of Nigeria, Presentation by Professor Alabi

Lecture and Discussion: Direct Investment in a Resource-rich Transition Economy. The Case of Uzbekistan, Presentation by Dr. Nadirkhanov

Final Discussion: Can the two Country Cases be compared?

As IWIM was founded in August 1987 this event is also a good opportunity to think about the research work of the past 25 years and about future tasks.