At a workshop in Ekpoma , Nigeria Professor Dr. Alabi, a former Alexander von Humboldt Research Associate at IWIM, gave a keynote speech  on 'Marginal Benefit Incidence (MBI) Analysis of Public Spending in Nigeria '. Dr Reuben Alabi said that there was need for pro-poor policies in order to "accelerate the speed at which the poor benefit more from increases in access to social utilities in Nigeria ". A purpose was to inform the Nigerian population in advance of the national elections about the mismanagement of the public funds. The report on the workshop is of interest as it shows that only a small share of public funds allocated to the states and local communities is arriving on the ground (see the Workshop Report from Professor Dr. Alabi). The research on the issues of education and health was done by Professor Dr. Alabi at his time in Bremen . He has spent 18 months as a research fellow financed by the A v Humboldt Foundation. Professor Dr. Alabi is preparing another visit to IWIM in Bremen so as to research on "Aid dependency and growth of Nigeria" (see the publications of Professor Dr. Alabi on the issues of "Marginal Benefit Incidence of Education and Health Expenditures" published in the IWIM Blue Series Discussion Papers).

A new UN Report on Africa was released by UNIDO

A new UN Report on Africa was released by UNIDO. The Report „Agribusiness for Africa’s Prosperity“ highlights the prospects of industrialization in Africa based on sustainable agricultural development. Seven development pillars are outlined and give the basis for a new strategy and for an action plan. UNIDO and other international and regional African organizations are working towards its implementation. Professor Karl Wohlmuth from the University of Bremen has contributed to this Report with an essay on the development pillar “Science, Technology, Innovation”. The title of his essay is “Strengthening Technological Effort and Innovation Capabilities” (see more about the Project Agro-Industries)

Impacts of the Global Financial Crisis on the Economic Reforms in Africa:

Impacts of the Global Financial Crisis on the Economic Reforms in Africa: The Research Group on African Development Perspectives Bremen releases the new volume 15 of the Yearbook, dealing with the impacts of the Global Financial Crisis (GFC) on Economic Reform Processes in Africa. Covered are: first, analytical studies on the impacts of the Global Financial Crisis (GFC) on growth, trade, employment, living standards and poverty, finance and development, banks and capital markets, and on government reform policies; second, country case studies (for Nigeria, Botswana, and Cameroon); and third, a sub-regional analysis of impacts and a detailed economic outlook for an important sub-region (for ECOWAS). Professor Karl Wohlmuth is one of the editors of the publication. Professor Hans Heinrich Bass has organized the conference where the first drafts were presented. Dr. Tobias Knedlik, Researcher at IWH Halle an der Saale, the Managing Editor of the African Development Perspectives Yearbook since Volume 15, invites submissions for Volume 16 of the Yearbook on the theme “Macroeconomic Policy Formation in Africa” (link zum Call for Papers Band 16).

PhD Study on Small and Medium Enterprises (SMEs) in Nigeria:

PhD Study on Small and Medium Enterprises (SMEs) in Nigeria: How they operate, how they cluster, how they innovate, how they network, and how they can be supported by government, by business actors and by international donors. These are the main issues of the new publication on Nigeria’s SMEs. Mister Osmund O. Uzor has now published his study on the important role of SMEs in Nigeria. Based on field researches and a thorough review of the literature, he develops a model (ISMED) how productive investment can transform the SME sector in Nigeria. Professor Karl Wohlmuth was the supervisor of the research programme on a “New Policy Framework for SMEs in selected States of the Federal Republic of Nigeria” and has written a Preface to highlight the importance of the study for the policymakers in Nigeria. Mister Osmund O. Uzor has also written various contributions to IWIM publications during his time as an IWIM associate (hier link zu Blue Series Discussion Papers), and he has also contributed to various editions of the African Development Perspectives Yearbook (hier link zu den Yearbook editions). 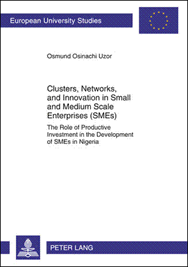 International Expert Group releases its Africa Report: Edited by the Director General of UNIDO, Kandeh K. Yumkella and other UNIDO staff a Report on Africa’s agro-based industrialization was released. The Report has the title Agribusiness for Africa’s Prosperity. The study is related to the Strategy for the Implementation of the Plan of Action for the Accelerated Industrial Development of Africa (AIDA), adopted by the Conference of African Ministers of Industry in Durban in October 2008 and the African Agribusiness and Agro-industries Development Initiative (3ADI), endorsed by the African Heads of State and Government  at the High-level Conference on the Development of Agribusiness and Agro-industries in Africa, held in Abuja, Nigeria in March 2010.

The President of IFAD (International Fund for Agricultural Development), Dr. Kanayo F. Nwanze, highlights in the Foreword to the Report the importance of the study for Africa’s agro-industrialization process. He argues that the seven development pillars identified and analyzed in the Report give the basis for a new development strategy for Africa. The President of IFAD shares the opinion that the findings of the Report can be helpful for initiating an agribusiness and agro-industrial revolution in Africa that is needed for sustainable growth and poverty reduction. IFAD was a collaborative partner in this initiative from the very beginning.

Professor Karl Wohlmuth has worked in his Chapter 6 for the Report on Strengthening technological effort and innovation capabilities. This development pillar is so far neglected in the discussion on Africa’s industrial development.  Professor Karl Wohlmuth addresses also the role of comprehensive STI (Science, Technology, Innovation) strategies and policies for initiating an agro-industrial revolution in Africa (see also New Project Agro-Industry Development Africa).

New Publication on the Economy of Sudan and South Sudan:

New Publication on the Economy of Sudan and South Sudan: A new study about the Sudan with the title "Institutions and Investment in Sudan" has just appeared as volume 18 in the Book Series of the Institute for World Economics and international Management (IWIM). The Book Series of IWIM is the flagship publication of the institute (link to the IWIM Book Series). The study was written by Dr. Berhanu Denu-G., a lecturer from Addis Ababa University, Addis Ababa, Ethiopia. He was directed and supervised in this project by Professor Karl Wohlmuth from the University of Bremen. The study was generously financed by the Volkswagen Foundation. Dr. Berhanu has spent various field research visits to South Sudan to generate new data on the transactions costs of business activity there after the Comprehensive Peace Agreement (CPA) of January 9, 2005. The author shows convincingly in the study how the environmental conditions affect business and how these conditions can be improved by institutional reforms (see Cover Berhanu and Contents Berhanu). 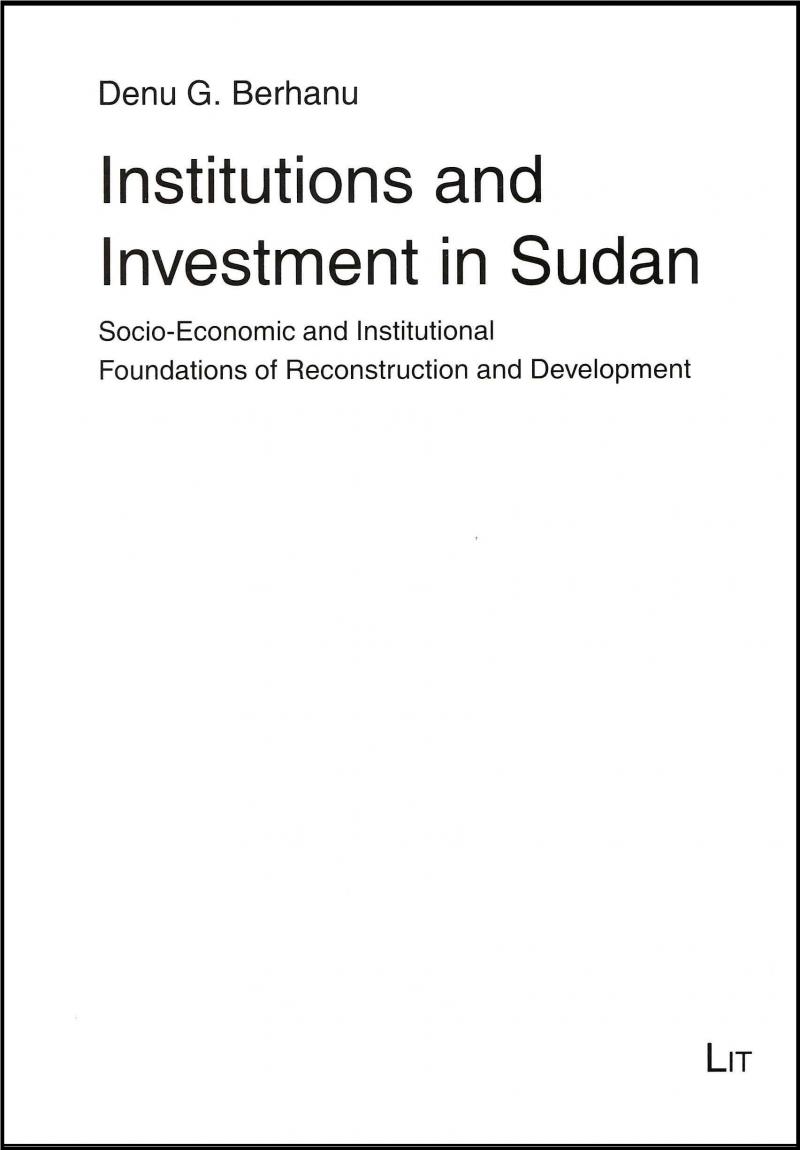 The study is of crucial importance for reforms in South Sudan as in few weeks – on July 9, 2011 – South Sudan will become the 54th state in Africa. The new republic has then the huge task of reconstructing the economy after the devastations of civil war and the uncertainty and insecurity since the CPA of 2005 till now. However, a cooperation with the North of Sudan will be important so as to avoid new conflicts about border and nationalization issues and about the international marketing of its oil production being located largely in the South Sudan. Another study by the author was recently published in the SERG Series (see SERG Paper 39). The SERG Series is edited by Professor Karl Wohlmuth from the University of Bremen and focuses on new economic developments and crucial economic policy issues in Sudan and South Sudan. Professor Wohmuth also directs a new research project on "Economic Policies in Sudan after the Referendum of January 9, 2011" to discuss issues following from the Independence of South Sudan for the economic policy of both states of Sudan (see the International Call for Papers).